Production (or crafting) is the process to turn a set of materials into a product with the help of an object build in the world. Cooking food has a basic implementation in the pre-alpha of Orcish Inn, with fish to bake and eggs to fry. Anyway, cooking food will be extended in a future version of Orcish Inn.

After clicking on a producing object, this interface is shown.

The end of the article shows a table with all the production recipes currently available in Orcish Inn.

Brewing beer is a major part of Orcish Inn, as the player's progress relates to the satisfaction of the visiting clans, which mainly consists of drinking a beer with the right taste, tint brightness, full body, bitterness, alcoholic strength and flavor (if any).

In all 3 cases, the production has to be fueled, for example with wood, charcoal or dung. Fuel doesn't affect the product nor its quality, but is necessary to start the production and keep the production running. Different types of fuel differ in the average duration until they get depleted.

The first slot of the malt box production is related to the fuel and doesn't affect the product, but without it, the production doesn't start.

The second slot takes a cereal crop (barley, spelt, rye, wheat or corn) and defines the malt's taste. Using a barley will result in barley malt.

The production interface of the malt box.

The first slot of the wort boiler production is related to fuel again. The second slot takes the malt. The third slot works like the third slot of the malt box: it takes between 1 and 6 water. One unit of water will result in a full body property of 0 and so on.

The production interface of the wort boiler.

Beer has six properties in total:

The first slot of the beer brewing kettle production is reserved for the fuel again. The second slot is dedicated to the wort, which sets the taste, tint brightness and full body of the final beer.

The third slot takes between 1 and 6 hop and like the water in the malt box and wort boiler, the amount of hop used defines the beer's acerbity. One hop results in an acerbity of zero, two hop in an acerbity of one and so on.

Some clans want a flavor, but it's possible to brew beer without any flavor at all. If the beer should have a flavor, a special crop has to be placed in the fifth slot. Currently available flavor crops are belladonna, blueleaves, dryroot, sunflower, lotus and Scholar's Fire

A beer brewing kettle will produce 20 beers with one production cycle. They are put automatically into near beer barrels or faucets.

The production interface of the beer brewing kettle.

Every producing object and every storage has so-called connection points, which can be displayed by switching to one of the underground layers with a button at the screen's bottom or by pressing C. These are points where the object tries to recreate its process by putting products there and pulling materials from. The connection points can look a bit off if the producing object is placed below a wall, because the object is moved a bit toward it.

After activating the pipe interface with a button at the screen's bottom, the connection points of producing objects and storages are shown. Furnace and loom can interact with the chest in the middle.

As an example, a malt box will put its created malt in a chest above, right, below or left to the malt box (where it's connection points are). If the product is moved to the chest, the malt box tries to grab materials from connected chests (fuel like wood and barley) and rain barrels (water) to recreate the exact same product. Therefore if the malt box produces a barley malt with a tint brightness of two, it will try to grab some fuel (for example charcoal if no wood is left), barley and three water from chests and rain barrels on the malt box' connection points. This automation will go on forever until it runs out of places to put products in or out of materials. 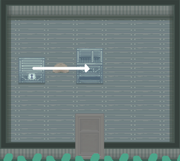 The copper-colored pipe is an input pipe, therefore the malt box is able to draw material like wood and barley from the chest. 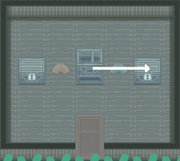 A combined pipe does the job of both an input and an output pipe. Therefore a producing object connected to a storage via combined pipes can draw materials and put its product in there. 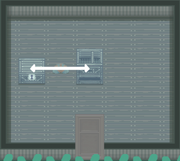 The partially copper- and silver-colored pipe is a combined pipe and therefore can transport materials and products alike.

If an underground layer is displayed (with or without connection points), all the pipes are marked with an icon to display its type. An empty circle stays for an input pipe, a filled circle for an output pipe and a half-empty-half-filled circle for a combined pipe.

Malt box, wort boiler and beer brewing kettle are connected to the two chests and the rain barrels outside via input pipes. Therefore, they can draw all the materials from the chests and rain barrels. Underground input pipes were used to skip the wall and to cover the area beneath the machines and chests. The beer brewing kettle is connected to the faucet in the tavern via an underground output pipe.

The same situation as above, but with another pipe layer view. Connection points of machines and storages are displayed too, now. 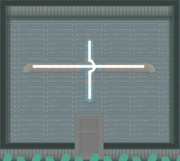 Overground and underground pipes can be used together. Here, an underground input pipe was used beneath the wall.

A typical beer brewing layout consists of a malt box, a wort boiler and a beer brewing kettle as well as two or more chests, some rain barrels, a faucet and optionally some beer barrels. Malt box, wort boiler and beer brewing kettle are connected to all chests with combined underground pipes, so they can draw fuel, barley, malt, wort, hop, yeast and flavor crops from them. The malt box and the wort boiler are also connected via input pipes to the rain barrels for the water they require. Rain barrels are often put outside of the room so they gather water during rainy weather. The beer brewing kettle has to be connected to the faucet in the tavern room via output (underground) pipes, if the player doesn't want to transport the beer manually there. It's also possible to connect the kettle to beer barrels via output pipes. The faucets have a higher priority in filling, so the tavern gets the beer first and if the faucets are full, the beer barrels store the surplus.

Some of the producing objects, like the malt box, wort boiler, beer brewing kettle or the furnace can have recipes attached to them. The corresponding button is available in the production interface. By clicking on it, the cooking recipe page in the hub book is shown and the player can select a fitting recipe. The producing object then trys to produce the specified item. Faucets can also have a recipe attached and therefore only refill with beer of that type automatically.

If a producing object with recipe attachment support is selected, the small "x" button opens the hub book, where a recipe can be selected and attached to the machine.

As an example, the player can create a beer cooking recipe with a specified taste of barley, a tint brightness of 2, a full body of 5, an acerbity of 1, an alcoholic strength of 0 and a belladonna flavor. If attached to a malt box, wort boiler and beer brewing kettle, all three producing objects try to grab the right type and amount of taste and flavor crops, water, hop and yeast to finally brew a beer of that type.

Storages can be paused, too. Then, producing objects don't interact with the chest.

Some of the producing objects have a special behavior to make everyone's life easier.

If you hover over an icon, it shows a small tooltip. The descriptive names used in the materials' and products' tooltips refer to the following items: